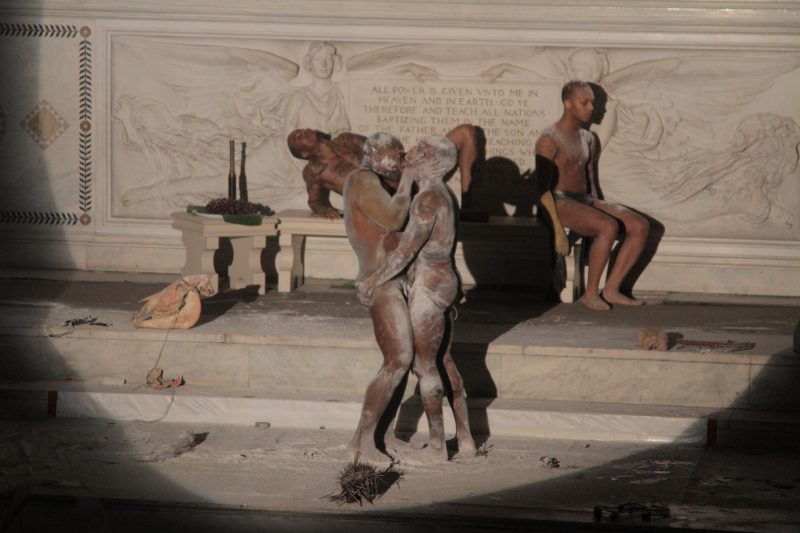 Lawrence Graham-Brown confronts the politics of religion, sexuality, and blackness in Rites of Passage/Sacred Spaces (2012). Presented at Judson Memorial Church, Graham-Brown and cast perform ritualistic acts that draw from Afro-Caribbean folklore. The performers use fetish objects and various aromas in the tradition of Obeah—religious, spiritual, and magical practices developed by West African slaves in the Caribbean to ward off misfortune or to cause harm to one another—while performing explicit homoerotic gestures with each other. In this rite of passage, the gay black male body becomes both a site of worship and a symbol of resurrection. This queer form of salvation seeks to reverse oppressive colonizing discourses that deem homosexuality a sin. Instead, the power of redemption is displaced and reclaimed from a gay black male perspective. These acts work to combat and dispel homophobic ideas in religion, especially in Graham-Brown’s native Jamaica and other Caribbean nations where such doctrines have historically been used to justify the killing, oppression, and punishment of LGBTQIA people.

LAWRENCE GRAHAM-BROWN is an interdisciplinary artist working in performance, sculpture, painting, and media. As an openly gay Jamaican-American man, Graham-Brown’s art practice works to combat homophobia and racism across geographical contexts. He uses his body as a canvas to dispel the stigma that queer, intersex, transgender, indigenous, and people of color face on a daily basis. His artwork has been presented at the Queens Museum, El Museo del Barrio, Leslie-Lohman Museum of Gay and Lesbian Art, Aljira A Center for Contemporary Arts, Institute of Jamaica, National Gallery of Jamaica, Galeria Homero Massena, Royal West of England Academy, Arnolfini Centre for Contemporary Arts, Galerie Lutz Rohs, and Shanghai Biennial. Graham-Brown’s work has been written about in The New York Times, Huffington Post, Jamaica Gleaner, Art Recognition Culture, Caribbean Art World, and THE ARCHIVE journal of the Leslie-Lohman Museum of Gay and Lesbian Art.